According to a survey conducted by top Food Marketing Agencies, 92% of Americans like popcorn.  More than 1,000 peopel were surveyed about popcorn-eating traditions.

Do you prefer Sweet? Savory? Plain?

Join us on January 19 as we celebrate National Popcorn Day!

Buttered, salted, kettled, drizzled with caramel, popcorn is one of those snacks perfect anytime, anywhere. It’s great on the go, in the theater, or in your living room!

Did you know that the corn we eat and the corn we pop are two different varieties of maize? In fact, the corn you’d find on your dinner table is most likely unable to pop at all! Only one variety of corn is able to become popcorn: Zea mays everta. This particular corn variety has small ears, and the kernels burst when exposed to dry heat.

In 1948, small heads of Zea mays everta were discovered by Herbert Dick and Earle Smith in the Bat Cave of west central New Mexico. Ranging from smaller than a penny to about two inches, the oldest Bat Cave ears were about 4,000 years old. Several individually popped kernels were also discovered, which have since been carbon dated and shown to be approximately 5,600 years old. There’s also evidence of early use of popcorn in Peru, Mexico, and Guatemala, as well as other places in Central and South America.

McGregor frequently offers Pop-Up popcorn in The Gardens to thank you Employees and welcome visitors. The smell is captivating!  Ummmm! 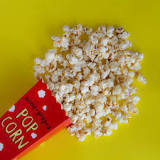